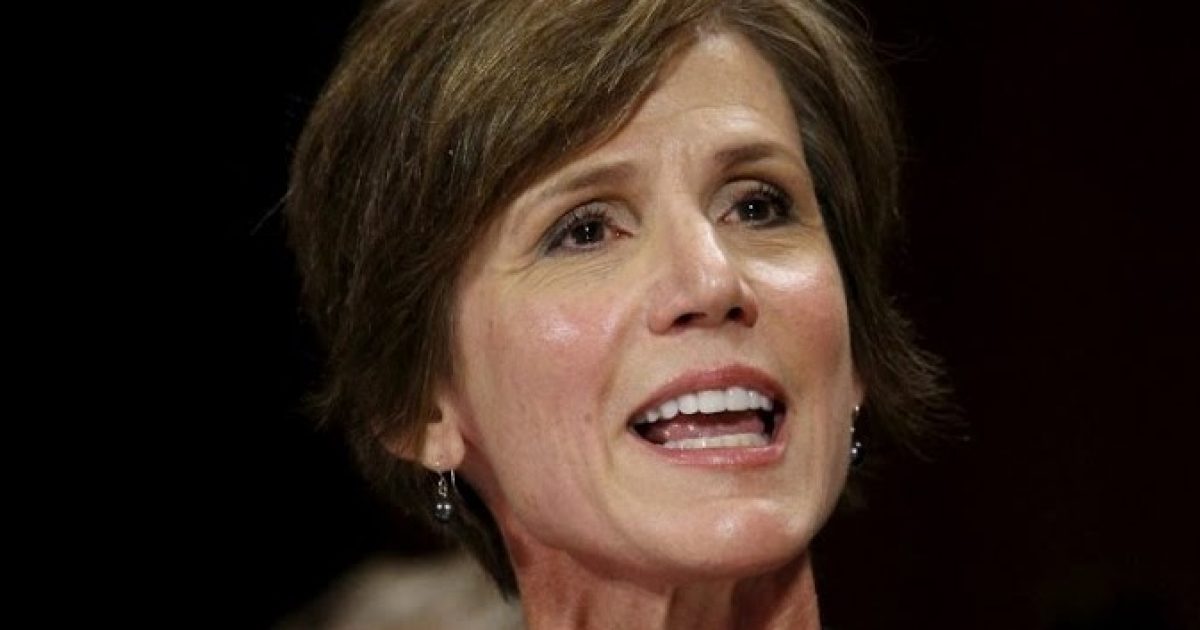 What is it that the DOJ is covering up about the actions of Attorney General Sally Yates in her short 10 days stay in the Donald Trump administration. She got fired in short order for refusing to obey immigration orders from her boss, the President of the United States, Donald Trump. Her actions have adversely impacted the banning of travel from terrorist supporting countries. Why have her communications and orders not been released? Who is supposed to be in charge here? Is the Department of Justice a power unto itself now?

Obama appointee Sally Yates was acting attorney general under President Trump for just 10 days — from Jan. 20, 2017 until Jan. 30, 2017 — but by any measure they were consequential days. Even now, two issues from Yates’ brief tenure are still of interest to congressional investigators. One was the series of events that led Yates, in charge of the Justice Department, to reject the president’s executive order temporarily suspending the admittance into the United States of people from some Muslim nations. The second is Yates’ role in the FBI’s questioning, apparently on dubious premises, the president’s national security adviser, Michael Flynn, four days into the new administration — questioning that ultimately led to Flynn’s guilty plea in the Trump-Russia investigation.

Trending: A New Trail to Follow In The Collusion Conspiracy With Some Questionable Links

Both are matters of great public significance and interest — and on both, the Justice Department is refusing to allow the Senate Judiciary Committee access to documents from Yates’ time in office.

On Feb. 23, 2017, Senate Judiciary Committee chairman Chuck Grassley wrote to Attorney General Jeff Sessions asking for “all emails to, from, copying, or blind-copying Ms. Yates from Jan. 20, 2017, through Jan. 31, 2017.” Grassley also asked for all of Yates’ other correspondence from that period, plus records of her calls and meetings…….

Taking On School Board Tyrants – This Is How You Do It!
July 26th, 2021 Sons of Liberty Media