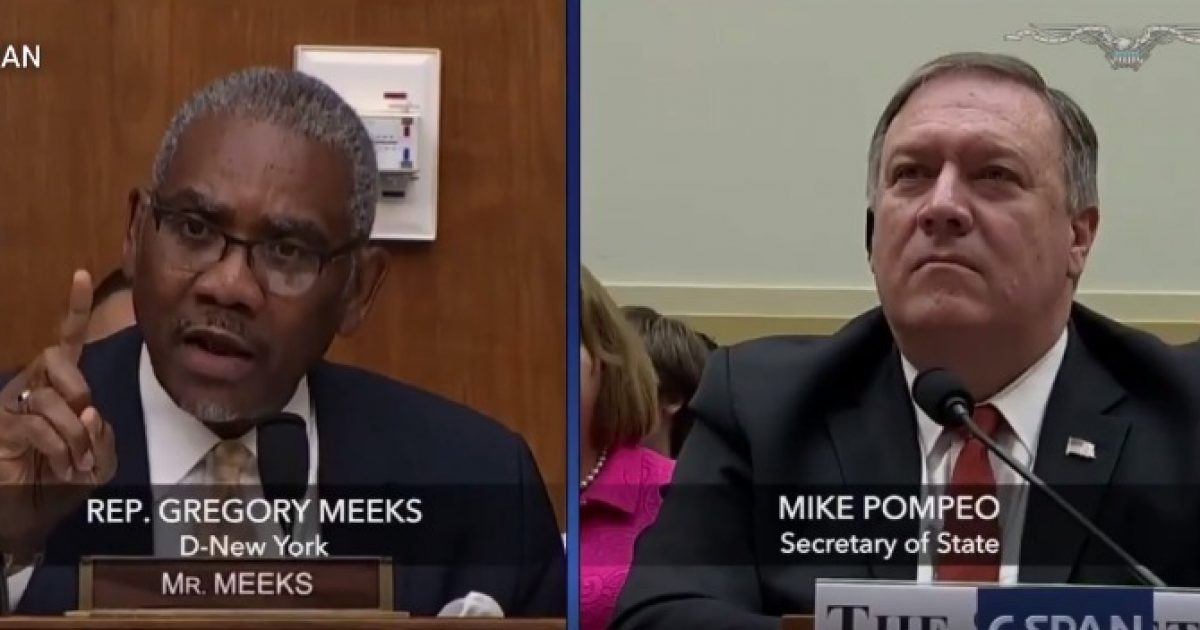 [VIDEO] Secretary of State Mike Pompeo was not in a mood to let Democrat Representative Gregory Meeks, of New York, get away with his insinuations. Representative Meeks seems to have harbored some bad feelings about Mike Pompeo from back in the Hillary Clinton Benghazi days. The questions reflected Meeks’ ire with Pompeo over the Benghazi hearings. As you can see in the short video, Pompeo was having none of it.

As Written and Reported By Joel Gehrke for the Washington Examiner:

Secretary of State Mike Pompeo snapped at Rep. Gregory Meeks, D-N.Y., on Wednesday after Meeks asked if it’s fair to say he “does not care about diplomatic security.”

Did SCOTUS make the right decision on medical mandates for large businesses?

“No,” Pompeo said in an angry exchange during his first appearance before the House Foreign Affairs Committee. “You should not conclude that.”

The question from Meeks was just the most heated example of House Democrats venting their frustration over Pompeo’s role as a member of the select committee that investigated the Benghazi terrorist attack when he was a member of the House. That investigation took place during then-Secretary of State Hillary Clinton’s tenure at Foggy Bottom.

“I think you can draw a line from this moment straight back to the most egregious example in recent memory of playing politics with foreign policy — and with a tragedy: the Benghazi Select Committee, on which you sat,” Rep. Eliot Engel, the top Democrat on the panel, said in the hearing. “The political circus that was set up to tear Hillary Clinton down, as the Majority Leader admitted — that was used to impugn the character of one of your predecessors.”

The rebuke passed without comment at the time, but tempers flared when Meeks took up the refrain later in the hearing.

“You scolded her!” Meeks said. “You went after her with venom….

MIT Doctor Prescribed Ivermectin To Treat Her Patients – She Was Stripped Of Her License & Forced To Undergo Psych Evaluation
January 21st, 2022 Sons of Liberty Media

HEY, FBI: What’s This About You Investigating Journalists For The ‘Sin’ Of Exposing Pfizer?
January 21st, 2022 Clash Daily