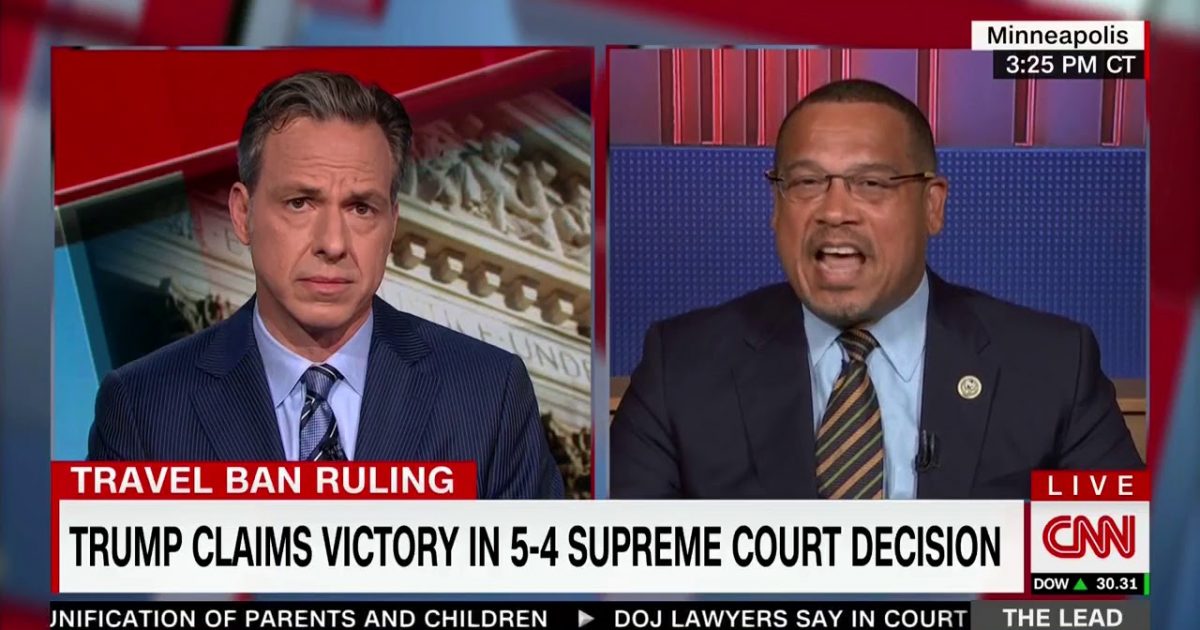 [VIDEO] Minnesota Democratic Representative Keith Ellison is an anti-Semite and hangs with anti-Semites. He is very pro -Muslim and is very unhappy that the President Of the United States has won his case before the Supreme Court and can now institute a travel ban against certain nations. Ellison sees this as just bigotry by the President. Watch as he has trouble defending himself on CNN. You will get the message.

Rep. Keith Ellison (D-MN) struggled Tuesday afternoon to reconcile his criticism of the Trump administration’s travel ban as “bigoted” and his ties to anti-Semitic Nation of Islam leader Louis Farrakhan.

Ellison sparred with CNN anchor Jake Tapper after fuming about the Supreme Court’s ruling in Trump v. Hawaii, wherein Chief Justice John Roberts declared that foreign nationals do not have a constitutional right to enter the United States. Tapper asked Ellison about being a former “follower of Farrakhan,” which set off the Muslim congressman.

TAPPER: What do you disagree with?

REP. ELLISON: I’m sorry that comes up in this context.

TAPPER: Well you are decrying bigotry, Louis Farrakhan is a pretty clear bigot.

REP. ELLISON: Right. And I agree that that’s true. And I think that I made myself very clear. But look that’s going back to the false equivalency. You know, I don’t have any support for what the individual you just mentioned stands for, nor do I agree with Trump’s bigotry either. But then again, you know, any time somebody tries to say that something is unfair and bigoted if you are going to say, one time you sort of said something or somebody said you said something and then –

REP. ELLISON: Jake, Jake, no I wasn’t. Jake, I’m sorry. That is not true, Jake. But I just want to say to you if anyone who raises concerns about bigotry then is put in a position to have to defend themselves, then we never get to talk about bigotry and I hope that’s not what your purpose is, Jake, because …….

THERE IS MORE! KEEP READING BY CLICKING THE LINK BELOW!

Keith Ellison Melts Down When Questioned on Links to Louis Farrakhan