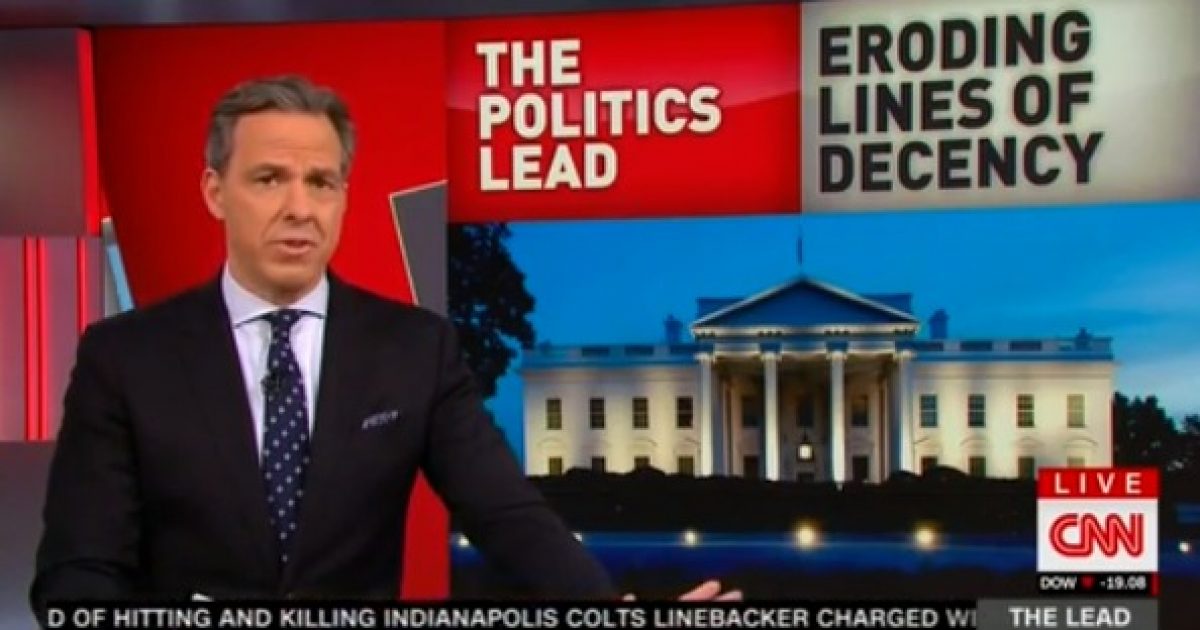 [VIDEO (If You Can Watch It)] CNN’s Jale tapper was in rare form in this video segment. It is well known that Jake is a friend of Bill’s, and a friend of Hillary’s, and a friend of Barack. You can be certain that he is no friend of The Donald. If you have the fortitude to watch this video, see if you can see how he distorts facts, quotes, and comments. he does this to paint as dark a picture as he can of the President. Talk about a Pot-Stirring, Name-Calling, and Prevaricating Talking Head. He is no Daisy at all.

CNN host Jake Tapper opened fire on the White House to begin his show Wednesday and accused them of “degrading” America’s standards with their depraved behavior.

“There are basic lines of human decency, norms to which society generally agrees and to which we adhere and we continue to see the Trump presidency eroding these lines,” Tapper said. “Some of the people marching alongside Nazis and the Klan in Charlottesville were very fine people, President Trump said, as he drew a line of moral equivalence between white supremacists and those who protested the white supremacists. Days after one of those Nazis drove purposefully into a crowd and killed Heather Heyer.”

“Or last fall after US Senate candidate Roy Moore was credibly accused by women of having sexually abused them when they were in high school. One of the victims as young as 14. Republicans withdrew their support for Roy Moore except for President Trump who doubled down,” Tapper continued. “To this list of those marching alongside Nazis and those accused of sexually abusing children, the White House has added, someone accused by two ex-wives of …….