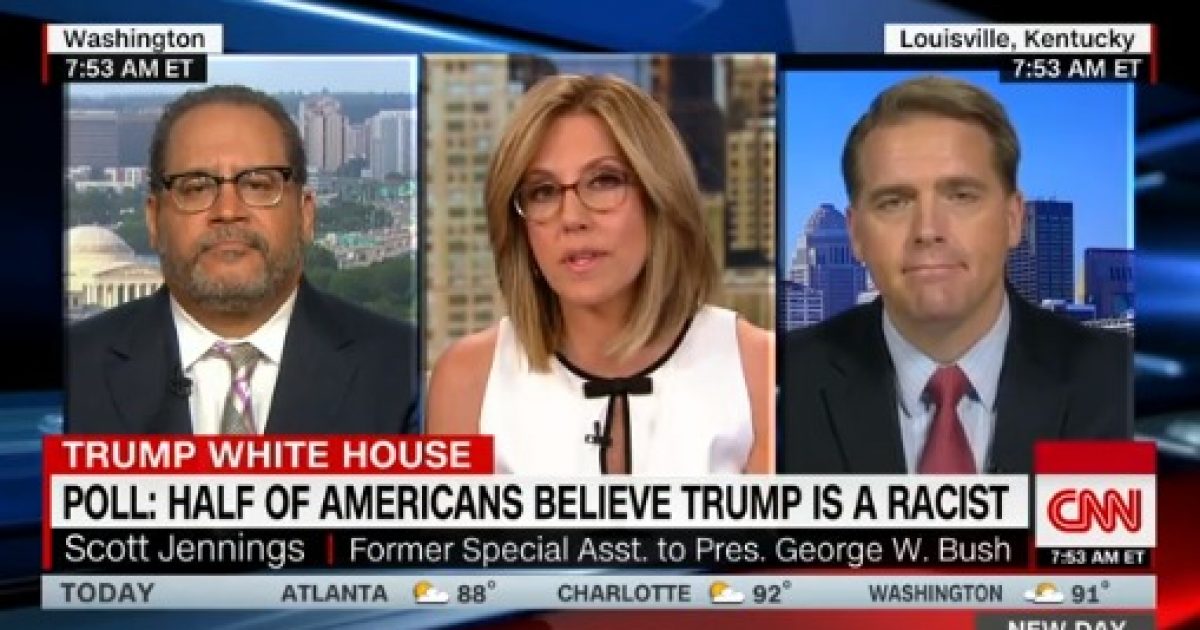 [VIDEO] CNN fires a broadside against President Donald Trump as they hang as many supposed racist actions as they can around the neck of the President. They have a Trump supporter on the triple split screen and take him to task for even standing up for Donald Trump. There is nothing in Ms. Camerota deportment that says that this was a journalistic endeavor on her part. Her compiled list of grievances against Donald Trump show exactly where this interview is headed.

Spoiler alert: At this network, President Donald Trump is a proven racist. This was a foregone conclusion and just like other narratives from the left, the outcome is always based on feelings, not facts. This is identity politics in action. Do not watch this if you have anger management issues.

A CNN debate about racism and President Donald Trump on Thursday got heated when one guest told the other to “find a spine.”

Georgetown professor Michael Eric Dyson and former George W. Bush aide Scott Jennings battled over whether or not Trump is racist, with Dyson and CNN anchor Alisyn Camerota ganging up on the Trump-supporting Jennings.

Jennings said he personally disagrees with things the president has said but that he ultimately views the presidency through the policies that Trump has enacted.

“So you overlook his words?” Camerota asked.

Dyson alleged that Trump has “emboldened white supremacists” to come forward, asserting, “the resurgent bigotry of America has been catalyzed by this president……

KEEP READING THE REST OF THE STORY AT THE LINK BELOW: